This work is licensed under a Creative Commons Attribution-NonCommercial-NoDerivatives 4.0 International License.

The Port of Piraeus 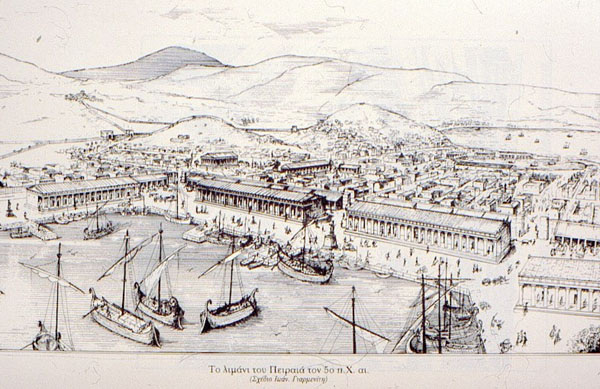 Graphic representation of the central harbor of Piraeus in the 5th century BC with a view of Emporion (Panagos C.T. 1968, 198) 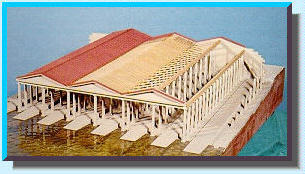 There have been recent archelogical expeditions to recover and map out the old Pireaus port. Most notably is the Zea Harbour Project which is trying to survey, excavate, and publish the archaeological remains of the naval bases of the Piraeus, including the harbour fortifications and the shipsheds that housed Athens' fleet of triremes. It was interesting to discover that the destruction of the Arsenal of Philo and the shipsheds only came about in 86BC when Sulla took the Piraeus.

The Arsenal Of Philo 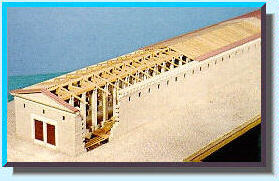 The discovery and semi excavation of the Arsenal of Philo occured during 1988-1989. Yet the importance of this building had already been noted due to several literary sources complimenting the arsenal (Demostenes, Plutarch, Strabo, Pliny, Val.Maximus and Vitruvius)(Greek and Roman sources) as well as the discovery, about οne hundred years earlier in 1888, of a marble stele with the detailed description of the construction and use of the building. The inscription on the stele gives us a very detailed representation of the building, allowing reconstructions to be made and making it one of the better known buildings in the Piraeus.
The construction of the Arsenal itself followed the years 347 BCE up to 323 BCE. Based on the inscription found, we know that the dimensions of the building are 138m length and 18m width. The building had two entrances on both sides of its width, with double doors. On the inside, the building becomes far more complex than seeming from the outside. It has two collonades of piers, which divide the interior space into three aisles. The middle one connects door to door throughout the length of the building, while the other two are to the left and right of the central one. Moreover, each of the aisles is divided into 34 compartments, which function for the storage of oars, masts, sails, ropes and cables. It seems that within those compartments there were different sections categorized for the storage of specific equipment.
Quite sadly, however, the physical remains that we can see today are very limited and include only a small part of one extremity of the building, from which we can make out one of the three aisles of the building.
Powered by