Overview of the History

At their core, the ship sheds symbolize the heart of Athenian naval power--that which allowed Athens to dominate as a regional hegemon during the 5th and 4th centuries B.C. Athens was not born a sea-power however. In the early years of the 5th century B.C., Athens possessed scant few warships compared to its neighbors of Aegina and Corinth. It was not until 483-2 B.C., with a massive Persian army and navy amassing, that the statesman Themistocles decided to invest Laurion's silver to finance naval construction. Indeed, it was this strategic foresight that allowed Athens to emerge victorious over the Persians in the naval battle at Salamis in 480 BC, establishing the city as the Mediterranean's premiere maritime power. Triremes, the boats housed in the ship sheds and the primary weapon in the Athenian naval arsenal, thus became the source of Athenian wealth and power, leading to economic, social, and political ripple effects. 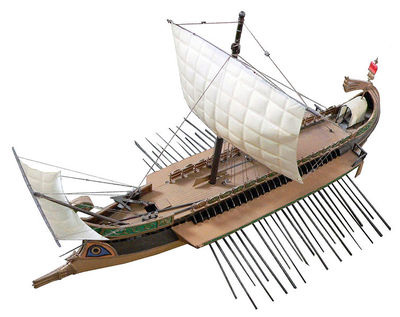 A digital historical recreation of an Athenian Trireme, the primary naval weapon in the Athenian arsenal. Source: http://upload.wikimedia.org/wikipedia/commons/6/6d/Trireme_1.jpg
Susceptibility of Triremes and the Need for Ship Sheds

Triremes were nonetheless vulnerable to significant damage. They required two essential conditions to remain usable and undamaged: 1. dry storage, and 2. shelter. As Bjorn Loven notes, "waterlogging added weight and therefore reduced a vessel's speed and maneuverability." Dry storage also "[prevented] their slender, softwood timbers from being attacked by wood-boring marine mollusks...a perennial threat to all wooden seagoing ships." The famous Athenian general Thucydides commented as well on naval vulnerability, writing, "Our fleet was originally in first-class condition; the timbers were sound and the crews were in good shape. Now, however, the ships have been at sea so long that the timbers have rotted, and the crews are not what they were. We cannot drag our ships on shore to dry and clean them, because the enemy has as many or more ships than we have, and keeps us in the constant expectation of having to face an attack.”

The response to this danger gave rise to the ship sheds--the large structures that allowed for safe shelter and dry storage for the Athenian naval arsenal. Construction on the shipsheds in Piraeus began in the 5th century B.C. These constructions kept the triremes out of the water as well as the intense heat and sunlight of the late spring, summer, and early autumn periods, in which the trireme timbers were susceptible to shrinking. By the late 330s B.C., Athens could house 372 triremes in the three harbors of the Piraeus--Zea, Mounichia, and Kantharos.
Review of the Zea Harbor Project and the Four Phases of the Ship Sheds

The Zea Harbor Project is a Danish-Greek archaeological excavation project taking place in Piraeaus. It seeks to more fully understand the ship sheds--how they were built, managed, and used in ancient times. They have been engaging in excavations and topographical surveys in Zea since 2001 and in Mounichia since 2005, confirming and correctingthe findings of previous research and adding new data to the pool of archeological knowledge. This new data allows reconstruction of the original terrain and shoreline of the naval harbors. Arguably its most significant achievement, the Zea Harbor Project has identified four key construction phases to the Piraeaus ports. Before the project, only two were known. Here we document a brief summary of each of these phases:

Phase I
The first course of construction dates to the early 5th century BC, primarily entailed unroofed slipways designed to facilitate hauling. This proved incredibly impractical and uneconomical however. The slipways offered inadequate shelter from the conditions of the sun and rain.

Phase II
The second phase of ship shed construction began sometime in the 5th century, and marked the first time that ship shed buildings were utilized. These structures consisted of parallel stone colonnades that supported roofs.

Together the Phase 1 slipways and Phase 2 shipsheds constitute the only verifiable archeological evidence of Piraean naval bases during the 5th century BC-- the time period in which the Athenian navy essentially controlled the Aegean Sea.

Phase III
The third era of shipshed construction extended the physical scale of the buildings. While previously the shipsheds were only large enough to house one trireme, phase III saw the construction of shipsheds large enough to house two ships stored end-to-end on a single ramp. This allowed for increased storage of ships and, consequently, a larger and more powerful navy.

Phase IV
The least is known about the last phase, but the Zea Harbor Project conjectures that these ruins likely consist of double-unit shipshed structures built after Phase III. 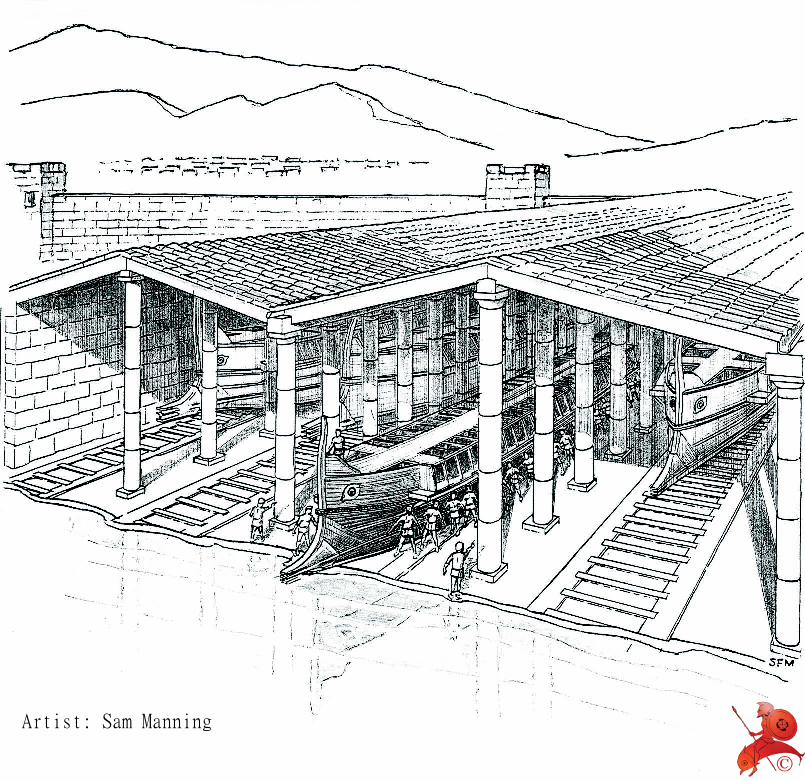 An imaginative archaeological recreation of an Athenian shipshed; Source: http://www.lordsofthesea.org/wp-content/uploads/2009/05/shipsheds-manning_stamped.png
Arsenal of Philo and its Dimensions


In 1882, Thomas Ludlow found a "slab of Hymettic marble of good workmanship." The slab was 1.16 X 0.54 X 0.10 meters in size, and essentially contained a blueprint for the Arsenal of Philo.


Ludlow wrote, "From a careful view of the evidence direct and indirect bearing upon the question, M. Foucart concludes that this inscription containing the specifications for he construction of the Arsenal of Philon was engraved in 346 B. C., and that work was begun upon it during that same year, and continued until the administration of Euboulos, in 339. The great arsenal was finished in 329 or 328." This discovery further verified the proper location of the Zea harbor, as the archeological record had shown that the Arsenal of Philo was located nearby the Zea ship sheds. Thus, by finding the marble inscription and ruins of the arsenal of Philo nearby the location archeologists had posited the Zea harbor existed, it further validated that this determinations of the archeologists were correct.


The marble slab read: "An arsenal shall be built in Zeia for naval tackle beginning near the propylaion which leads from the agora as one approaches from behind the ship houses which are roofed in together. The length (of this arsenal shall be) four plethora; its breadth shall be fifty feet, or fifty-five including the walls…" It also included further specification, such as "The walls and columns of the arsenal shall be built of the stone of Akte."


The exact details and measurements contained on this marble slab were incredibly valuable. It thus provided the foremost source for archeologists to learn about the Arsenal of Philo.
Sources
The primary source used for the first two sections of this website is:

Loven, Bjorn. The Ancient Harbours of the Piraeus: Volume I.1. The Zea Shipsheds and Slipways: Architecture and Topography. Denmark: Narayana Press, 2011. Print.

The primary source used for the third section of this website is: