To interact with the Building Z Neatline exhibit, please visit http://neatline.dukewired.org/neatline/show/building-zs-phases. This interactive Neatline exhibit allows the viewer to scroll through the timeline to see what the building look liked at certain times. In addition, the viewer can click on points in certain rooms of Building Z 3 and see what items were found in the specific room. All of the images and maps come from Ursula Knigge's Kerameikos XVII,1 and Kerameikos XVII,2. The numbers under the images of archaeological finds correspond with the descriptions in the second version of the book.  There are screen shots of the Neatline exhibit at the bottom of the page.

Doing this visualization gave the creator, Tori Cohen, an idea of the evidence available, as well as how much more evidence is available for Building Z3 than the other phases. Because of this, as well as due to the fact that more is written about Building Z3 since it is considered to possibly of been a house of prostitution, Tori and Professor Dillon decided to focus on Building Z3 and the founds found in that phase of the building.

This visualization also allowed Tori to imagine what activity was going on in each room, for instance, in the room with the loom weights weaving probably took place. In addition, Tori was able to better imagine the layout of the building through having to look so closely at the map while mapping the objects into specific rooms. Tori also had to translate some German in order to understand certain parts of the texts. This exhibit also allows one to flip back and forth between phases in order to compare the different phases and see the transition more easily. Through putting the objects back where they were found, one is able to get a better sense of the building and imagine a time commercial activities took place there. It is one thing to see the images in the book, but this visualization takes it to a whole new level by allowing the viewer to see the objects pop up when one clicks on a certain room. It helps one look back at the texts about specific rooms with a new understanding and tool.

There is a lot of potential for this project to grow when the next person takes over the project, since this project is meant to continue on past this class. It would be ideal if this person understands German, since the two texts about the original excavation are entirely in German. This person can scan additional images from the other phases, and also translate and read the corresponding descriptions to the numbers under the photos of archaeological evidence in order to interact with the material on a greater level.

Tori did a lot of research on Building Z in order to create the best visualization, understand commercial architecture, and understand the building. She even got to spend some extra time while in Greece at the Kerameikos Museum, where she first became interested in how all of the different objects found were once placed somewhere in the building, and how these objects all told a story of specific activities happening in certain areas of the Building. Building Z is the perfect example of the difficulty defining the commercial use of a building, and a perfect example of the diverse roles a building can have. This building has evidence of coins in certain rooms, many loom weights indicating weaving, and possibly a correlation with prostitution, by female servants in Z3.
Building Z was a building built on the corner of the City Wall and the Sacred Gate in the Kerameikos. This building went through a number of phases, and has shifted its internal construction as well as its role due to a number of natural disasters. The shifting use of Building Z underscores the difficulty in giving "commercial space" a precise definition. The building was initially a domestic space in the first phase. In Building Z's second phase, however, it transformed in to a tavern or workshop, acting as a location where products were bought and sold. Lastly, it possibly was a house of prostitution in its third phase, where “courteseans attended both to the looms and to the guests” (Knigge). These differing roles establish Building Z as a node for all of the possible definitions of a commercial building- a place where currency is exchanged for services, and where products are made to be sold.  It is truly difficult to define commercial architecture because there could be many functions of a building, such as in the case of building Z, which all need to be encompassed under an all inclusive definition (Knigge 87-95 and Glazebrook 34-50). Also, although some argue that this building was a place of prostitution, some sources, such as the text at the Kerameikos Museum, do not mention anything about this in their narratives.

Knigge gives a thorough narrative about the history of the building in relation to Athens. According to Knigge, at the time it was first built, the city had not reached out to its fortification walls, and Building Z was the first part of the town to do so on the angle between the City Wall and the Sacred Gate. This space was thought to be domestic and is from right before 430 BC. This was shortly before the Peloponnesian War. After the first building fell, probably due to an earthquake, Building Z2 went up in the same area, but with a new plan. Some think it was a domestic space like Building Z1, but there is not definite evidence for this. Building Z3 went up in the second half of the 4th century BC (Knigge, 93). The evidence from this time indicate "it was no longer a simple dwelling" (Knigge, 93). For instance: loom weights suggest weaving and also have a tie to prostitution and female slavery, drinking and dining ware, because it was also possibly a tavern.  It was destroyed at the end of the 4th century BC, burying the household goods and therefore, preserving the plethora of evidence we have on the building today (Knigge, 93. ) There is not much preserved from the last two versions of the building that were initially constructed in the first half of the 3rd century BC (Knigge, 94). In terms of who would be coming to this building on the outer wall, the Sacred Way carried a lot of traffic for people coming in and out of the city (Knigge, 95). It can be assumed, therefore, that Building Z3 was an ideal place for a commercial space.

In summary, doing the visualization enhanced Tori's understanding of the Building Z and commercial architecture, and there is a lot of potential for someone to take the project on. Knigge and Glazebrook provided the most useful information for Tori in terms of getting a grasp on the building and its role as a commercial center and its role within Athens.


Tori would like to note that in addition to the scanned images in Neatline, she also has some other maps scanned from the Knigge texts in German, as well as pictures she personally took of Building Z and of the display in the Kerameikos Museum on Building Z, and she would be happy to share them if you email her to ask tac28@duke.edu. 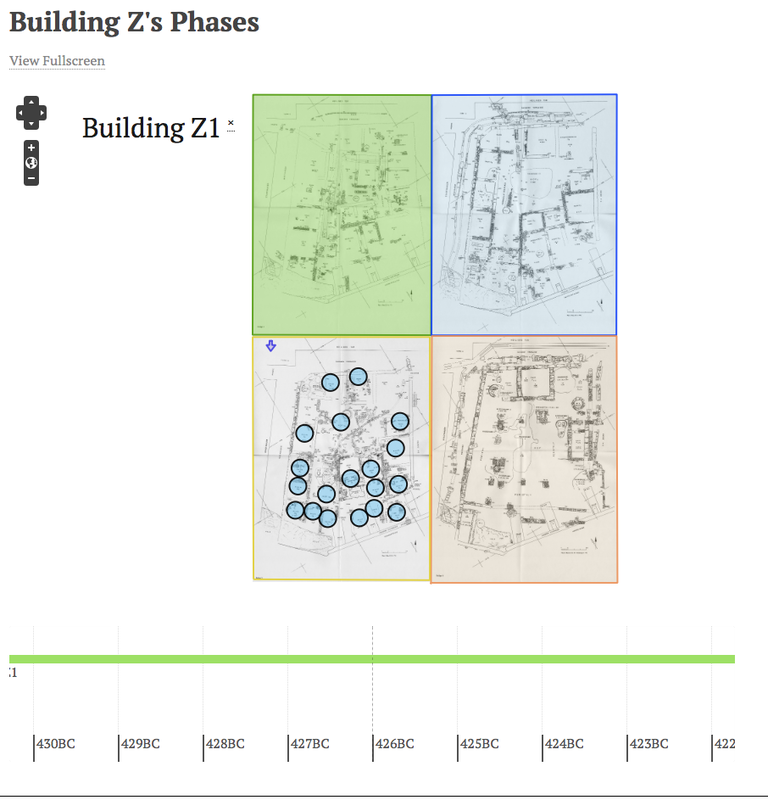 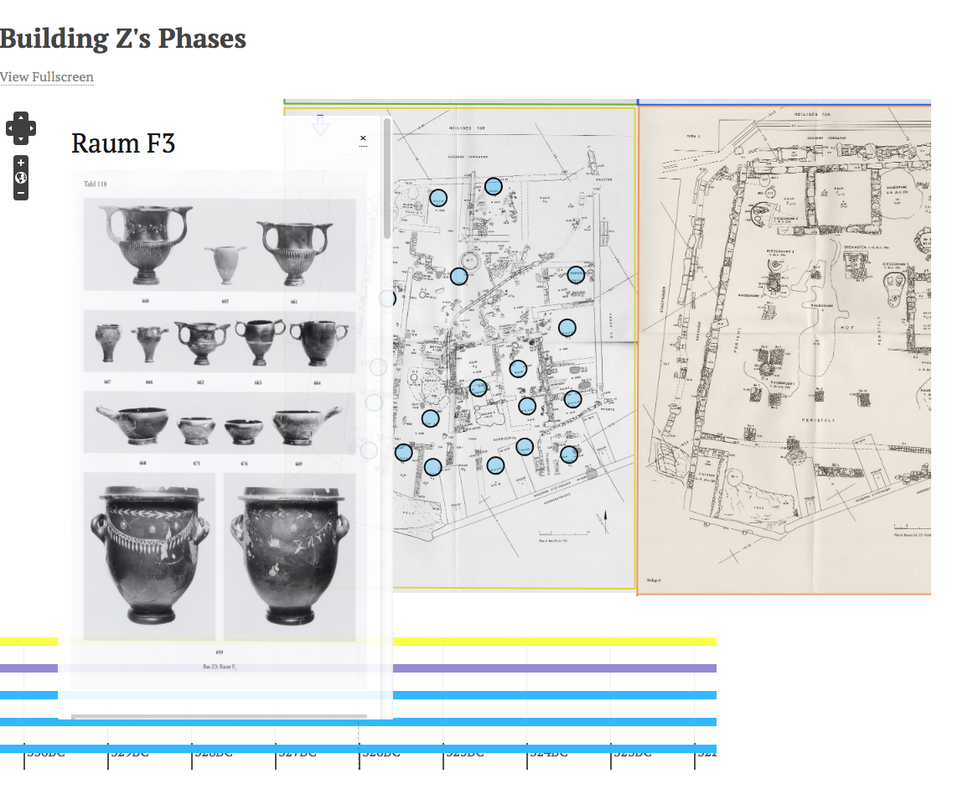 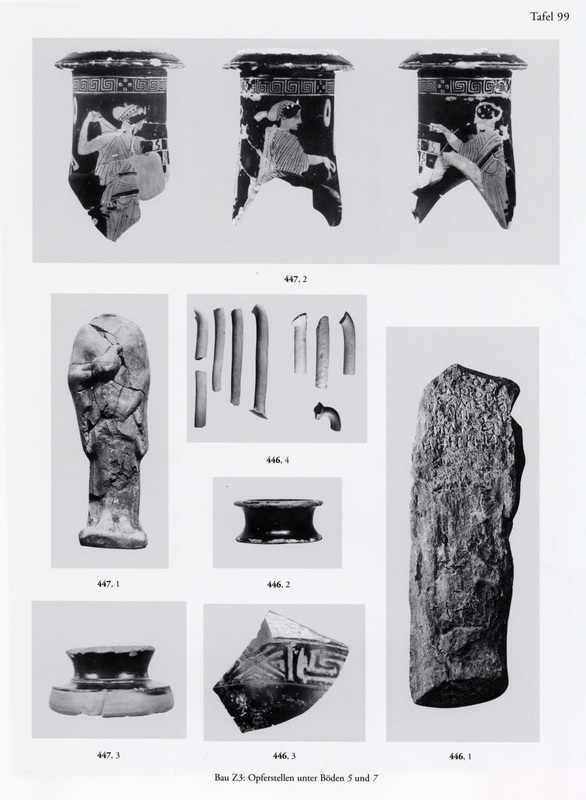 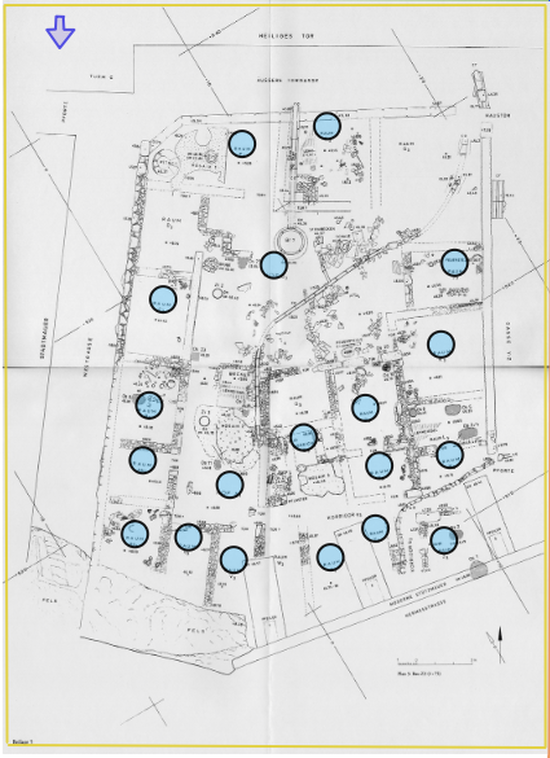